Audimation Services has been acquired by CaseWare International Learn More.

Apply the Pareto Principle (80/20 Rule) to Get Better Samples


Numbers in a population generally aren’t evenly distributed.  Just ask Vilfredo Pareto (1848-1923), the famed Italian economist whose observations have been named the Pareto Principle or the 80/20 Rule.  So why use evenly distributed stratum for stratified random sampling?  Probably because there isn’t time to puzzle out how the numbers are distributed.

For this example, we’ll use a small inventory file and assume that an auditor must physically test a sampling of the inventory.

Use Field Statistics to first identify if the file has only positive or both positive and negative numbers. Open Field Statistics and click on the blue numbers in the Positive Value cell to quickly perform a direct extraction of records with positive values.  Click “Save,” and name the new file.

Open Field Statistics in the new file. Make note of these values: 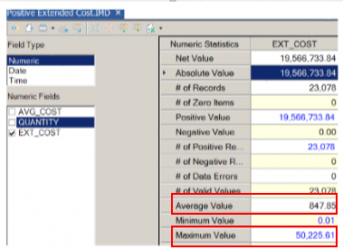 Do a quick estimation of the midway point between the average value and the maximum value. Precision is not required here – you can do this in your head — so halfway between $800-ish and $50,000-ish is about $25,000-ish.

STEP 4: STRATIFY YOUR POPULATION INTO 2 BANDS

Using the values from Step 3, stratify your data into 2 bands: 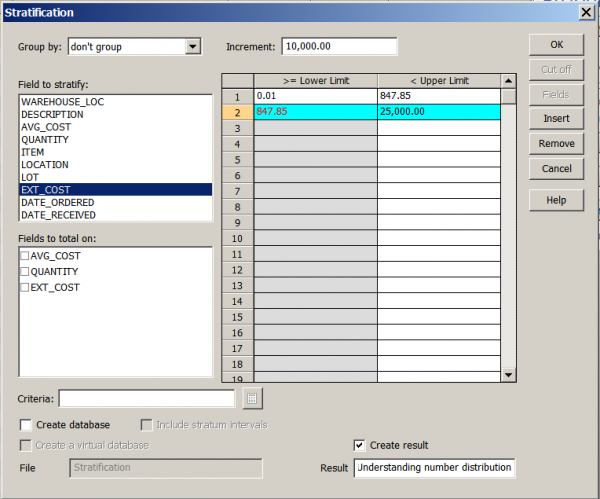 In our example, 73.74% of the records are in the below-average band (Stratum #1), but those 17,000+ records only account for 17.51% of the money in this inventory file. The records in the above average band (Stratum #2) only account for about 6,000 records in the file, but cover over 80% of the monetary value. The four ISI’s are captured in IDEA’s upper limit exception band. With this understanding, a stratified random sample can be focused on areas that are more material.

If you have questions about this or other IDEA functions, please give our help desk a call at 888-641-2800 Option 4.
Or email us at [email protected]

By Sarah Palombo
Sarah Palombo founded Avery Public Relations in 2007 and took on Audimation Services as her first client. She has more than 20 years of experience developing communications programs and creating content.


Data Acquisition - Tips for Success
Jun 19 More than ever, organizations are realizing the valuable insights and opportunities that lie hidden within both structured and unstructured data. Obtaining acce...


Data Acquisition and Overcoming IT Objections
Jul 20 The acquisition of client data, more than any other single factor, will determine the success or failure the audit. As custodians of system data, the IT departm...


Importing Date Fields
Jul 24 There are times when you import a date field and it just does not work out as expected. Here are ways to address the problem before or after the import.  ...