IDEA now runs faster and offers more flexibility than ever before


The latest version of IDEA introduced a host of new features and improvements.  IDEA now runs faster and offers more flexibility than ever before.  Two major improvements are the update to Stratified Random Sampling and the ability to integrate Python scripts into your IDEA software.  Here’s a quick introduction to those features to get you started.

Stratified Random Sampling grants auditors the ability to take a more informed audit sample which balances materiality with impartiality. Stratified Random Sampling is a popular feature which can save time during the sampling process since it allows auditors to break down transactions into strata before selecting the sample, thereby ensuring that a sample is truly representative of the entire population, considers materiality requirements, yet remains impartially selected. With IDEA 10.3, this feature now has the ability to specify the percent of records within each stratum, which allows the process to be more effective when populations and file sizes vary greatly in size from month to month.

To use this feature, start the sample by setting up your stratum and choose the numeric field to total on as you normally would.  Click Ok to proceed to the next screen.  You’ll notice that the Sample Size and percent (%) columns are editable. 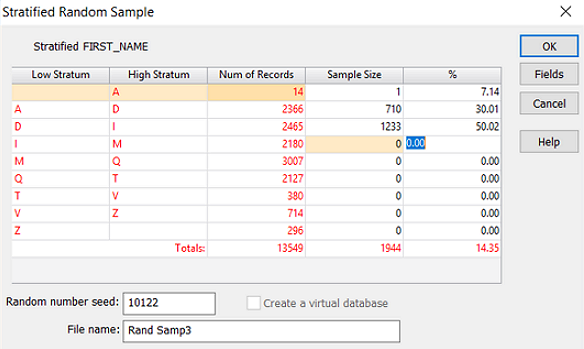 Simply update the values under the % column to the values you want to include in your sample and click the OK button. The resulting database will look just like other stratified samples you’ve used.

Before you can run Python scripts from within IDEA, you have to first enable them in the Options window.  Open IDEA and click File>Options. Make sure that the System tab is selected and look for the checkbox labeled “Run Python Scripts”. 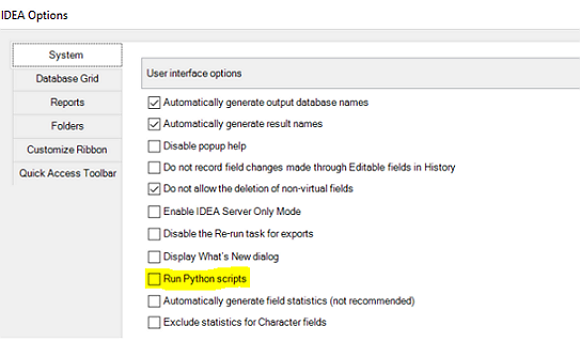 Check the box and agree to the notification in the next window to enable this feature.  Now you can use Python scrips with IDEA.

Once that is set up, there are two ways to use Python scripts.  First, you can run the script directly by opening IDEA and going to the Macros tab. Click the Run icon and select the Python script you would like to use, then click Open.

Python scripts can also be run using @functions in the IDEA Equation Editor.  Open the Equation Editor and look for the @Python function. You’ll find it under the Character group on the right.

Note that IDEA 10.3 comes with two pre-built Python scripts for you to test.  If you have IDEA 10.3, you can find those scripts in the Custom Functions and Macros folders of your Samples managed project.

We hope this will be very helpful to your team. And, as always, if you have questions about this Tech Tip or other IDEA questions, please give our help desk a call at:


Infusing Python into Your Analysis with IDEA
Oct 06 The tech community often refers to Python as the official programming language for non-programmers. It’s free and easy to learn (even if you don’t know wher...


5 Reasons to Use a Professional Data Analytics Tool
Feb 01 Spreadsheets, like paper, haven’t gone away. And we understand why everyone likes using them for analytics. They come along with the office applications y...