LPL Financial, a wholly-owned subsidiary of LPL Financial Holdings Inc. (NASDAQ:LPLA), is the largest independent broker-dealer in the United States. LPL Financial provides an integrated platform of proprietary technology, brokerage, and investment advisory services to over 13,500 financial advisors. In this interview Assistant Vice President of Internal Audit, Tim Smith, explains how he has used IDEA® Data Analysis Software for over 10 years and how it currently helps his team of IT auditors on a variety of IT and financial and compliance audits. 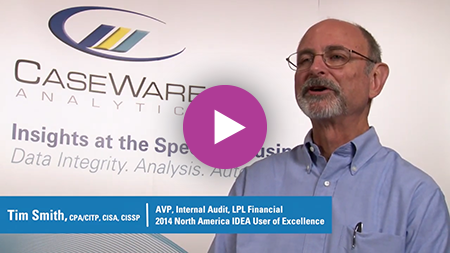 How Do You Currently Use CaseWare IDEA®

As AVP, Internal Audit, I manage a team of 5 people and we conduct IT audits (500+ systems) and help ensure regulatory compliance with FINRA (Financial Industry Regulatory Authority ) and SEC (Security Exchange Commission), as often times there’s a lot of information in our systems that support regulatory rules and regulations that we need to audit and understand.

When Did You First Start Using IDEA?

In 2001, GAO (The U.S. Government Accountability Office) came to KPMG to do some work on educational loans on behalf of the U.S. Department of Education. My involvement in the project was first training five GAO auditors on how to use IDEA and perform data analytics as well as work on the problem of possible fraudulently granted loans. We went to various loan services and found out that people were using social security numbers for deceased citizens. We learnt this through performing joins against the deceased citizen’s database and the social security numbers of loan recipients in the educational records. We also used fuzzy logic in the address field to find that people who were co-signing loans were geographically located in places that they would have no reason to know the student involved. So at the end of the day, we were able to have about USD $13 million returned to the treasury.

What are the Benefits of Using IDEA?

I use IDEA® because it gives you the freedom to think about what you want to do, not how you need to do it, and that’s a big differentiator. At the same time, it’s a great staff training tool because at the end of the day, the history file tells you what you did, both good and bad and this is a way to teach folks. Also, more importantly, one of the first times I used IDEA® and people asked me why I wasn’t using Microsoft® Excel or Microsoft® Access, my answer was, when you have 200,000 lines of data and you accidentally hit the wrong key, how do you tell which line you hit? The concept of being able to have a file that is its original version while at the same time being able to manipulate it by way of field manipulation is unbeatable in any other tool.

What are Some Innovative Ways that You Use IDEA?

Another thing that is helpful is thinking about the idea of files in transit between systems. I had a client that did sales through Siebel® CRM, and the file would then be dumped (exported) overnight and picked up (imported) the next day into the General Ledger. The sales manager at this firm also knew this and had access to the files. At night, he would go into the file system and change the dates on particular records so that he would get cash awards for ‘apparently’ improving his receivables flow. Using the concept of IT security, meaning the file in transit was not protected; I performed joins on the sales order number and found different dates on either side of the system to catch this fraud.

Would You Recommend IDEA to Other Auditors?

Every place I go, I recommend IDEA®, even to shops that use the competition. It is so intuitive and at the end of the day, if you have the tool but it’s not used, it’s a complete loss of benefit. So if you have a tool that is on the one hand so powerful and on the other so intuitive, allowing you to use your imagination, it’s a win-win. I have brought IDEA® to my current employer, LPL Financial. I definitely recommend it to people in both accounting and IT.